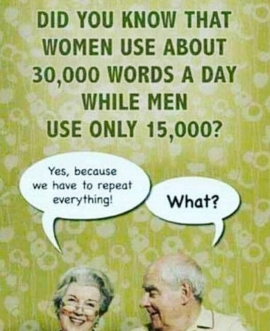 My mom and I have been telling Dad for ages that he needs to get his ears checked.  Of course being a stubborn man of a certain age he says that his hearing is fine and that we don’t speak clearly or aren’t speaking directly to him.  Apparently speaking a little bit louder, looking at him and turning your body towards him when you are having a conversation isn’t direct enough.  And if we raise our voices, we are yelling.  It has gotten so bad that he doesn’t even realize who is talking to him.  Mom said something and he looked at me and said, “What did you say?”  We then proceeded to get into an argument because I didn’t say anything.  How do you get into an argument when you aren’t even talking?

Supposedly he went to the hearing specialist and after his exam, he told my mother that his hearing was just fine.  How is that even possible?!?  It is like me saying that when I don’t wear my contacts I can drive.  For those of you who don’t know me, I am almost as blind as an earthworm.  I shouldn’t leave my house without corrective lenses.  He finally admitted that he wasn’t entirely telling the truth about his exam and agreed to go back for another test.  This time he showed mom the results and he passed.  He doesn’t need hearing aids.  This leads me to believe that he has selective hearing and is too lazy to listen.  This explains why he talks to the animals more than the rest of us.  It might also be because they don’t yell and start arguments with him.  Not that my mother or I would ever do that.  We are very placid and reserved people.  We almost never lose our shit when someone isn’t listenting to us.  By never I mean always and there is nothing more infuriating than someone saying “what?” repeatedly.  Unless it is “sorry?” which is what Australians say instead of “what.”

As I get older I am trying to be more patient but it isn’t working.  How is it that I revert to being 13?  Today I lost my temper in a parking lot.  I am an adult.  I own my own house.  I have a car.  I have a cat that I have kept alive for 16 years and three plants that still have their leaves.  You would think I could count to 10 or use some breathing technique to calm down.  Nope, it is like red to a bull.  And the worst thing of all is that he and I are exactly alike.  Everything that he does to make me nuts is what I do to make him nuts.  There is no doubt about where my genes come from.

So this is what I have to look forward to when I get to his age.  The only difference is that I won’t have a wife and a daughter to torment and I may be yelling at myself in parking lots.  Note to self – Get a dog so people think you are eccentric, not crazy. 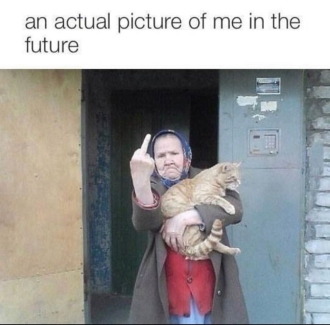