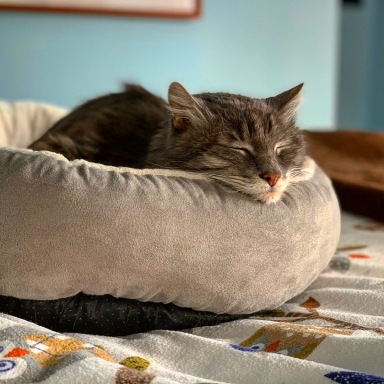 Last week, I lost my Penelope Pussycat.  She was 18 and while I know that is ancient in cat years, it still doesn’t compute.  She was supposed to stick around until she hit at least 20.  I told her that.  We had a deal.  She hasn’t stuck to her side of it.  Typical cat, doing things on her own terms.  The only upside is that now I might get to brush my teeth a lot faster since I don’t have her butting in to drink from the tap.

I know that having a pet is different from having a child but she was my baby.  She was there through every bad relationship, every big event, every bump in the road.  She was so much more than a pet.  She was my reason to get up in the morning.  Let’s be real here, there was no way I could sleep through her sitting on my chest, licking my face and yowling at me to feed her breakfast.  She was my reason to come home at night.  Who would she talk to without me there?  Who would she bring her “kills” to in the middle of the night?  And by “kills” I mean the ferocious little stuffed toys that I got her when she was a kitten.  She never wanted to play with any of the newer models that I snuck into her toy box yearly.  She was the best companion, always wanted to snuggle and never complained that I took up too much room in the bed.

I think my parents were worried that I might jump in front of a bus without her here.  Case in point, my mom flew up the day after it happened.  I told them that I wouldn’t jump off a bridge or run into traffic but I am not sure they believed me.  That is when you know that you are a Cat Lady – everyone asks about your mental health and are extremely concerned when something happens to one of your babies.  I guess it is also a worry when it is your last baby and you haven’t been without one for 18 years.

But now to the really important questions…  Does that mean that I am no longer in the Cat Lady club?  Have I lost my membership rights?  Am I going to have to redefine myself?  I might even have to start dating again to fill the void.  Oh please god, no.  I don’t have the fortitude for that.

I think my mom had the same response to me rejoining the dating pool so she took me to the Seattle Humane Society to “look” at cats.  I told her I wasn’t ready and that it might be a while before I could even entertain the idea of adding a new member to my family.   Her response was, “It won’t hurt to see what the process is and how you get on the list once kitten season starts.”  Seeing as how anything was better than staying home, I gave in.  When we looked at the website there were no kittens available so I felt like my heart would be somewhat safe.  Most of the adult cats were already spoken for and I definitely wasn’t bringing home a dog.  I love them but they are way too much work and I would for sure choose one with separation anxiety.  I seem to choose adult men with that issue so why would a puppy be any different.

Turns out they did have kittens, three of them, just transported from Kauai.  One was pre-adopted as soon as he hit the floor and the other two were destined to go home with me.  I now have a 2 pound little monster stalking my fingers as I type this.  Her butt is wiggling and I can see her getting ready to pounce.  Her brother is asleep next to me, probably dreaming about his next foray into the litter box where he will treat it like a sandbox and probably step in his poop…again.  Their names are Winston Purrchill and Eleanor Furrsevelt.  They will need some time to grow into them, once we are past the pooping issues, eating dust bunnies and climbing the curtains.

I really didn’t think I was ready and I may not be entirely but I would far rather have this chaos than come home to an empty house and no Penny.  Once a cat lady, always a cat lady. 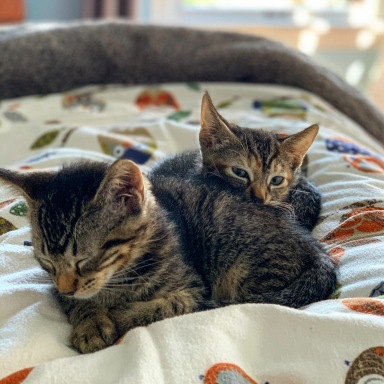