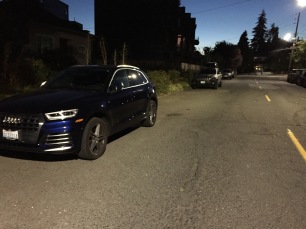 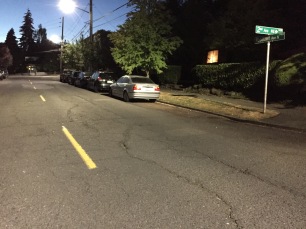 How is that even a thing?  Since when can you get a ticket for something that is essentially invisible?  I know the city of Seattle is broke but come on.  Next thing you know they will start making up unmarked red zones or handicapped spaces.  I took pictures to fight my ticket but according to the judge at my dispute hearing, a blind person could have walked into my car because I was blocking the crosswalk.  If it was unmarked, how would said blind person even know there was a crosswalk?  There was no dip in the sidewalk, no marks on the street.  I also explained that the word choice was extremely misleading.  What about a residential crosswalk or something that seems like it could be legit?  Something that didn’t sound completely fabricated to make money?  I was told that I could walk across the street to lodge a complaint with the City Council but it probably wouldn’t help because it has been that way for 37 years.  Super helpful, thanks for the advice.  The only good thing that happened was she reduced the ticket from $47 to $28.  To be honest, it was the principle of the whole situation that motivated me to fight it, not the money.  Also, the examples the judge gave me of similar situations were ludicrous.  “Not all stop signs have the No Parking 30 Feet sign on them.”  Ummm…they aren’t unmarked stop signs.  There was another example but it was so ridiculous that I can’t even remember it.  The point is the usage of the word “unmarked” on my ticket and the note that a picture was taken.  So was the Easter Bunny, the Tooth Fairy or Santa Claus in that picture?  They don’t exist either.