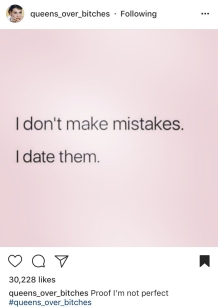 1) You meet a much younger guy (Douchebag or DB for short) in Vegas, have a one-night stand and then 5 months later he moves in. What is the Vegas tag line? What happens in Vegas stays in Vegas? Not so much.

2) You hang out with a bartender (Casper, the emotionally crippled ghost) to get over DB and it takes 4 months to have sex. Aren’t bartenders notorious for casual sex? What bartender wants to get to know you better and then is such a weirdo that he shies away from sex after calling you his sex angel?  Yes, it is hard to write that without laughing.

3) Instead of actually going out with anyone from Tinder you create an album called “Tinder Gems” and you share it with your friends so they can see the hell of online dating.

4) Your parents offer to pay for a match-maker because you aren’t able to close the deal yourself.

When a friend of my mom’s was single, she came to my local coffee shop on the reg and raved about all the eligible men she met. My luck so far has included a bearded creeper who always moves closer to me when I sit down, a bunch of men who could be my father, and one of the gay baristas. The good news is that I am still able to kill it as a fruit fly. My ability to increase my circle of gay friends is not in question even though my ability to find a straight male is.

Here are some Tinder Gems for you.