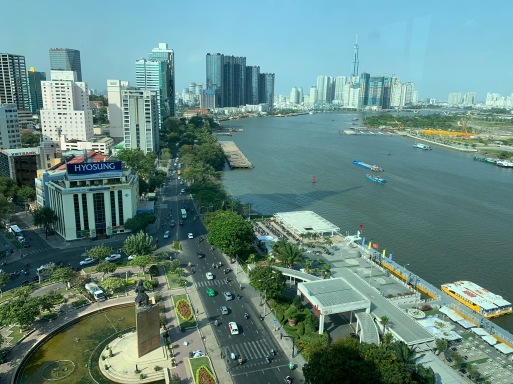 The last time I was in Saigon, I was 19 and one of the only things I remember is my aunt’s friend Maurizio (an Italian veterinarian who specializes in camels or more specifically, the fleas found on camels….), smuggling rare turtles back to Cambodia in his underpants.  We bought them at the pet market and he kept them in the safe of the hotel overnight.  He was able to get them back to his pond in Phnom Penh with no problem.  Today that would never happen.  He would for sure be thrown into jail for smuggling or would have to pay a hefty fine/bribe.  Although, knowing Mauricio he probably would be able to talk his way out of it.  To say he is a character is an understatement.

This trip I have been stunned by how much the city has changed.  It is almost unrecognizable from what it was in the 90s.  Now I can understand how my parents feel when they go back to places that they haven’t seen in decades.  It also makes me feel like a crotchety old lady and that I should be saying things like, “When I was young, there weren’t so many cars or tall buildings…  Can you believe how expensive things are now?  Last time I was here I could buy a chicken for a dollar.” 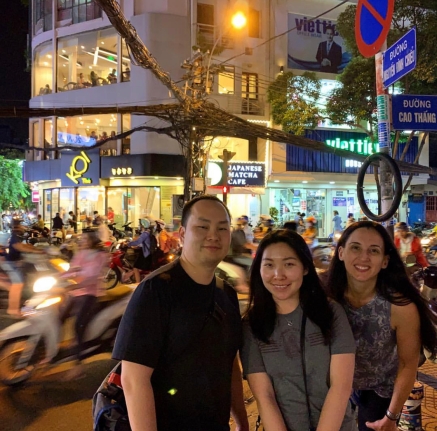 Crossing the street is still overwhelming but now there are more cars, not just scooters, hurtling in your direction.  Getting from one side to the other was like an exercise in zen meditation.  Empty your head and keep moving.  Don’t look at what is zooming towards you, just focus on getting to the other side of the street, they will avoid you.  For the most part this worked until I went to visit a friend’s family in another district and thought for sure I was going to die.  I felt like no one was trying to avoid me but instead they were gunning for me.  My friend’s cousin had to stop in the middle of the street with his hand up and usher me across.  The confidence that I had acquired and the effort to not look like a stupid tourist when I crossed the street disappeared instantly.  Fortunately when I returned to District 1 my zen attitude came back pretty quickly.  Maybe they are more used to tourists and understand that we can be like wild animals, skittish and unpredictable. 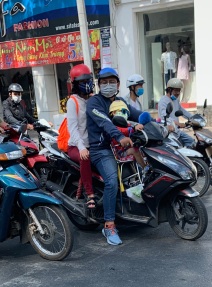 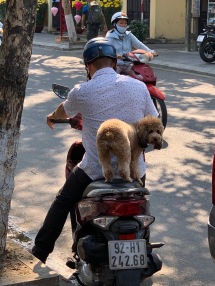 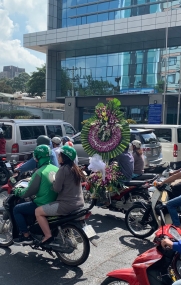 Being on the back of a scooter is way less stressful than being on foot.  You really get a sense of how the traffic works and why it works.  Yes, everyone honks but no one slams on the brakes or seems to have road rage.  It is also amazing what people carry on their bikes – shop signs, building materials, luggage, multiple children, dogs…  And it works. 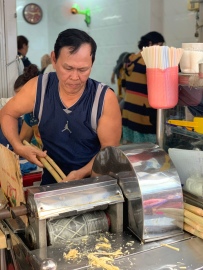 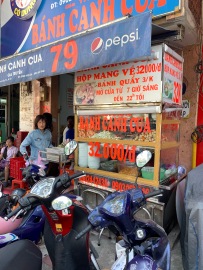 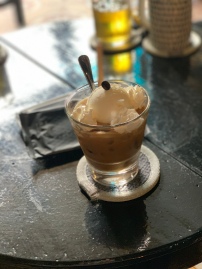 I definitely preferred being on a bike because I had a great view of the city and areas that I wouldn’t have gone to otherwise.  I did a tour called Back Streets of Saigon with Saigon Food Tour and saw alleyways and apartment buildings that I would have missed on my own.  My guide, Linh, took me to wet markets, food stands, temples and a great coffee shop called The Root Coffee.  At the temple I learned that if your incense stick ash curls as it burns, the gods have heard your prayer. If it doesn’t, they haven’t. To combat the gods’ hearing problems, spiral incense which always curls has been added as an option.  Nothing like the industriousness of humans. 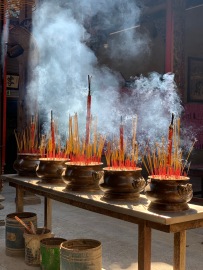 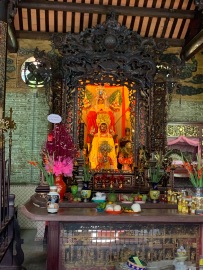 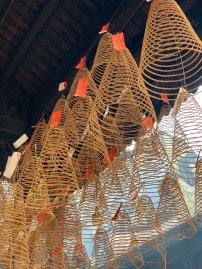 As always, my favorite part of the trip was the food.  Even in Bến Thành market which is known for being a tourist mecca the food was fantastic.  I truly believe that it is hard to get a bad meal in Vietnam.  Fortunately the food is pretty healthy so I didn’t feel like I needed to buy new pants to make up for overeating.  My favorites were the Bánh mì (Vietnamese sandwich), Phở (Breakfast noodle soup), Cơm tấm (Broken rice with marinated pork) and Bánh xèo (Vietnamese yellow pancakes).  I was lucky enough to have a homemade meal with a friend’s family and that was by far the best food we ate.  Nothing else compared after that.  It was one of those meals where you leave the table in pain because you stuffed so much in.  Not only because it was amazingly good but because you didn’t want to seem rude by not eating enough. Unfortunately my Vietnamese accent is terrible.  When I tried to say thank you, I was told that if I didn’t do it right I would either be saying “orange” or “shut your mouth.” I stuck to English after that…

After a trip to Thailand it took me months to be able to eat Thai food again.  Fortunately that isn’t the case this time.  I am looking forward to my next bowl of Phở and can’t wait to try Bánh mì at my local Vietnamese deli. 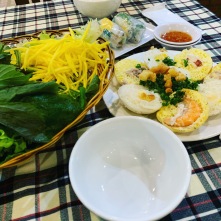 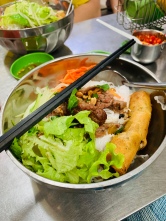 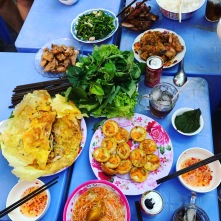