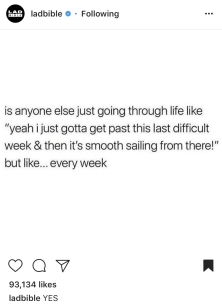 Did the universe not get the memo? Was Mercury in Retrograde?  Is there more airy-fairy, woo-woo shit I can blame it on?

So far this year my cat “went to college”, my dad started radiation for prostate cancer, my car was broken into and my entire wallet was stolen and I can’t escape seeing the fucktard bartender every time I go to MY Starbucks.  I keep telling myself that everything could be so much worse but now I am worried I am tempting fate.  Someone is looking down and saying, “Oh, you want it to get worse?  Just watch!”  NO!  No, I definitely don’t.  I am good.  I would hate to be greedy.

Today I heard some good news so things might be looking up…  The grammar gods have spoken and after every sentence there should be two spaces.  I feel pretty pumped since that is the way I have always written.  Soon they will say that week-end has a dash in it and I will be two for two!  Who needs a boyfriend or a job when you have grammar?

It seems that the perfect job is still eluding me.  I had interviews the day after my car was broken into and pretty much bombed them because I was a total scatter-brain.  I was so focused on how I was going to pay for my parking (no cash and no credit cards) that I didn’t even know what floor I was on when I got out of the elevator.  The worst part of it all was that I scraped up my friend’s car that she loaned me so I could get to the interview.  Fortunately once I wiped off the dust it didn’t look too bad.  Nothing a silver sharpie won’t fix.  Just kidding.  Of course I will pay for anything that needs to be done to it…as long as it doesn’t cost more than a silver sharpie…

As far as meeting the man of my dreams I keep thinking about DB (douchebag ex for those of you not in the know).  I don’t know why I like to rub salt in my wounds but I seem to think that feeling bad is only worth it if I double up on the salt and add more.  Why stop at shitty interviews?  Why not dwell on the fact that I am single and that my ex is probably gallivanting around town having a blast?  A friend told me that he is still on Bumble which if he was a normal person would mean he is still single but since he is a DB he could be in a relationship and “just meeting friends” on dating apps.  Sometimes I wish I hadn’t blocked him on everything because there are such great memes that I could send him.

But the good thing is that I do have the will-power to not stalk him on social media.  Instead, I had a friend do it.  It is priceless to hear what a delusional waste of space he is from someone else.

Anyway, I know that I will get things figured out.  If not, I can go back to my original plan of being a barista at MY Starbucks.  That way I can poison Fucktard’s coffee.