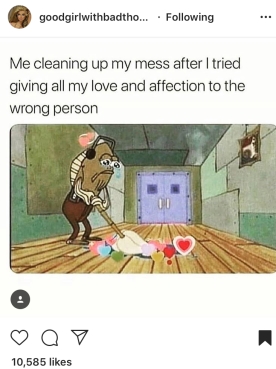 “You will meet someone when you least expect it.”

The reality is that I don’t really want to work at it.  I have a cat.  Three more and I will be a stereotype or a meme.  Whichever comes first.  The idea of putting myself out there seems like so much…work.  It is all about priorities really.

What about meeting someone when you most expect it?  Surely that makes more sense than being in the mind-set where anything goes.  Big surprise but, I want to be in complete control.  I don’t like to least expect period.  I can appreciate the sentiment but for some people they shouldn’t be left to their own devices when they are “open to anything.”  That sounds like a recipe for disaster.  Too much alcohol and not enough sense.

The other night, I went to a friend’s party and per most of my social events, I was expecting it to be all gay men and a few women for some estrogen.  Essentially, my happy place.  I can be my irreverent self (for good or bad) and I don’t have to worry that my friendliness is being mistaken for flirtation.  You could say I was least expecting to find a straight man there.  As I was stuffing my face with guacamole, the man next to me started asking me questions.  Questions that gay men don’t ask.  Once I ascertained that he was straight I realized that the friendliness vs flirtation equation had gone down the toilet and I needed to reassess quickly.  It felt like a total bait and switch.  Maybe if I had been drinking more, he had been a riveting conversationalist or had more than one stamp in his passport – Mexico – not even Canada which is three hours away – I would have been more engaged.  I was nice but within reason.  When the host came over to me about ten minutes later and said, “So my friend thinks you are really attractive” of course I was flattered but when you least expect it is not always the best time.

I had dinner with a friend last night and she made the comment that my picker isn’t broken, it is my tendency to stick with people that is.  I might pick them for the right reasons but I stay with them for the wrong ones.

Broken sticker or broken picker, I need to expect it all and pick and choose appropriately.  Nine times out of ten a one night stand is not going to turn into a fulfilling relationship but ten times out of ten it will make for a great story.