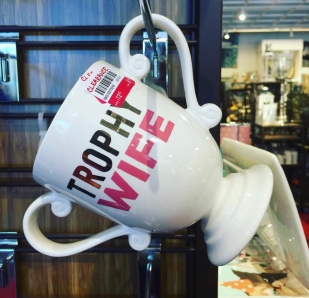 It is a new year so I have to reassess my life.  My biggest question at the moment is, at what point do I have to stop saying that I am going to marry rich?  Eventually you age out, right?  The older I get, the younger the trophy wives are.  I am not saying I am not a trophy.  I for sure am, as long as you like trophies who are starting to look and feel their age and are incredibly particular about everything – cleanliness, how the dishwasher is loaded, folding sheets (especially the fitted ones), why cereal is a meal for any time of day.  Yep, I am still a trophy.  I think it might be a participation trophy but that still counts.  Who doesn’t want to marry someone who will insist on separate houses because the stress of living together will be too hard on the relationship?  Granted, the houses can be next door to each other, it isn’t like I am hoping for separate continents.  Although that would have been ideal with the last person I went on a few dates with.  I will also provide a key so the person doesn’t feel like he has to knock every time he comes over.  Although a text or phone call ahead of time might be a good idea.  Chances are I will have to wrangle the 7 dogs and 18 cats I plan to have.  Before you start passing judgment, the house will be clean.  Always.  No matter how many animals there are.  I may be letting myself go in some ways but that is not one of them. Maybe I should refer to aging as the patina of knowledge – the shine goes away but the filth of life sticks…  That doesn’t sound any better, does it?

But to be honest, even if I was 15 years younger and looking for it, I am not sure that I could hack it as a trophy wife.  I know I don’t have the patience to cater to someone else’s whims all the time and I certainly don’t make the effort to be eye candy…ever.  I struggle to maintain my own life, let alone that of a person who has expectations of whom I should be and what I should look like.  Actually, now that I think about it, my last boyfriend had super high expectations of who I should be and how I should look and he sure as hell didn’t provide me with the life that I would expect as a “sugar baby*.”  A few months into our relationship, a friend of mine was doing my make-up for a photoshoot and he asked her to make me look like a porn star.  Yep, he was a winner and totally “got me.” But back to me as a trophy wife.  The idea of it makes me laugh.  I can barely make it through an hour of yoga without thinking about how dirty the floor is or whether that might be black mold growing on the ceiling or how often they wash the blankets/straps/other accessories and if the person next to me is sweating on my jacket.  What if I had to cut his toe nails or wax his back hair?  I mean, that is part of the job isn’t it?  I can hardly handle my own human anatomy let alone someone else’s.  Long story short, people are gross.

At the moment, I am sitting at my office (aka Starbucks) and there are three elderly gentlemen in the corner chatting about how “water can run uphill under the right circumstances”.  While I don’t know what those circumstances might be, I can hear what they are talking about because they are speaking louder than people with good hearing do.  But I think these three would be my demographic.  Let’s face it, I am too old to get a sugar daddy who still has all his hair and hearing.  However, I am in the right neighborhood to find one who can support me in the way to which I could easily become accustomed.  These guys are here almost every day.  One of them just mentioned that he hired a traveling tennis pro.  And he has had the same taxi driver for the last 8 years.  Ok, I just decided that I can’t do it.  If these are the conversations, I would shrivel up and die inside.  As I have mentioned before, I have no poker face so pretending to be interested would never happen. But even beyond the conversation, there is one major deal breaker – VIAGRA.  Enough is enough.

Instead, maybe I should try to get adopted by a rich matron with no children or heirs.  I am way better suited for that.  We could sit around all day and judge people while drinking tea or tequila.  I could entertain her with my witty banter and caustic commentary.  Or does that only happen in movies?  Didn’t Doris Duke adopt an adult?  Supposedly she was trying to replace her dead baby.  That sounds like way too much baggage.  Wow, people are weird.  I think I just have to come to terms with the reality that I will not marry rich.  I will stick to the original plan which is to get rich on my own or get slightly injured by a moving vehicle and get paid out sufficiently well.

*I learned that term after reading an article about a woman who called herself that.  Maybe if I was 21 I could call myself a sugar baby but I doubt it.  At least not with a straight face.